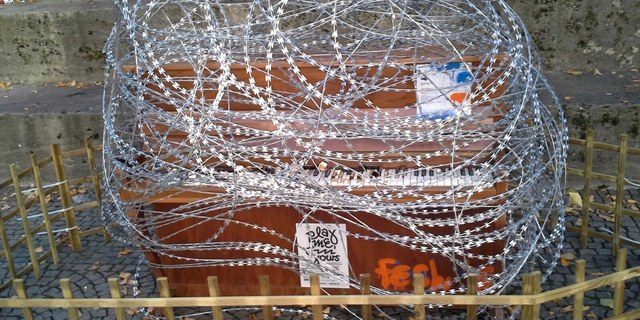 Folks, first of all, piano above was meant to be a piece of ART. It was on display in Munich 2015 (DE) and although we couldn’t reach nor play it at the time, it seemed just the right eye-catcher for today’s blog…

There isn’t a single subject in this world without adversaries; Public Pianos are no different. Pros & Cons put aside, what can we do to remain a smiling example?

Violence comes in many sizes and shapes, so let’s distinguish between:

Heart-breaking, but let’s look at those 3 in more detail. 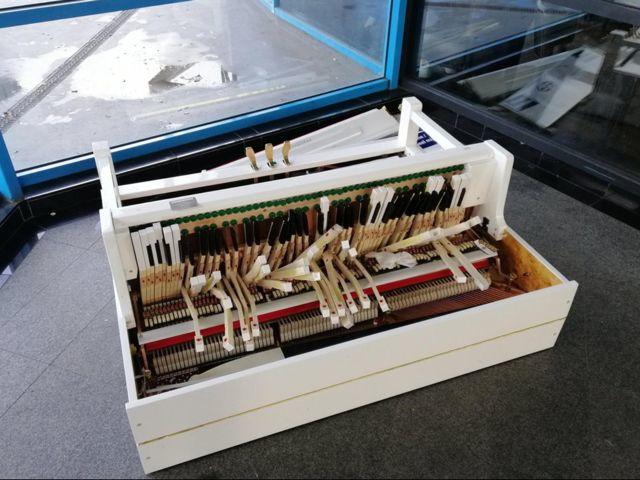 Photo credit – AT5 (Amsterdam) and Police-officer/photographer

Unhappy citizens can do bad things to Public Pianos. In general we respect everyone’s opinion, but once people practice violence to our beloved instrument, those are the cross-roads where we split indefinitely. When we studied publications on PIANO HATERS, we found countless publications in various languages and even more countries. Daily news footage from one state to another, it must be devastating to the ones facilitating and playing those pianos.

I can’t look at these destructions without thinking of this quote from Fight-Club (1999):

I don’t expect those people ever to read this blog, so let’s move on and try to continue beautiful things!

We’ve played all continents of this planet and we’ve never experienced physical violence against us or any other players. Even better news: we never found any publications on it. Let’s hope it stays that way.

Verbally though, one rare occasions, we’ve observed and experienced some. In general, bystanders liking what you’re doing will show a sign of appreciation, where others simply ignore you. Interestingly, those that clearly meant to be unkind never did so with eye-contact, they’d cross behind the player hissing something nasty while walking on. Once you descend into the Twitter sewer, some anonymous heroes remain deep inside the woodworks with quotes like (translated):

Ehm, have a nice life to you too, anonymous unhappy persons, what can I say?

Some of you might disagree this being an act of violence (and that’s OK!). Looking at it from the perspective of the piano, let me assure you that 6 simultaneous hammer fists, elbows etc. can be quite damaging to the instrument. Secondly – in our humble opinion – the damage is done to the child when it wrongly gets a message it’s OK to mistake a piano for being a toy. You’d be amazed to see how many of them get phone-filmed by their parents while impairing the piano…

As a piano pilgrim, observing inattentive or aloof parents/caretakers, we have a few tricks up our sleeve to get a child’s attention and share our respect for the piano:

Stay safe, keep your pianos up right and have fun playing!